Today both Pieter and I had to go to the hospital to have blood taken for the tissue and cross-match tests. Unfortunately I didn't get to see Pieter as he went early morning because he and Lizelle had tickets to watch an Olympic event.

I arrived at 11am and made my way to the Renal Unit reception. I was met by Ray Trevitt the Specialist Nurse whom I've only spoken to on the phone a number of times. It was nice to be able to put a face to a name. Ray was very polite and kind, he gave me the necessary paperwork and told me to have the blood taken and then meet him in his office. It went smoothly again and this time the nurse that attended to me was very friendly and talkative, which helped get my mind off the 6 tubes of blood being taken from me. 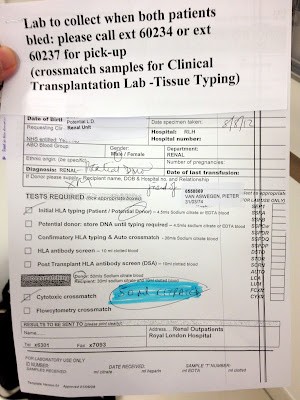 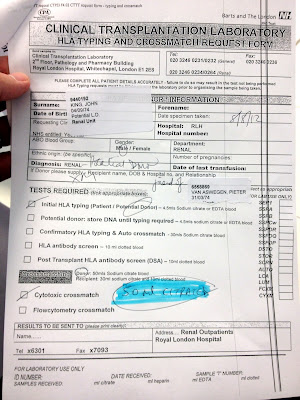 When I met Ray, he talked me through all the pros and cons of donating and receiving a kidney, and explained the whole procedure to me again. It was a very relaxed, open conversation and Ray was keen to answer any questions I had. Ray is very experienced and it shows. Where I am very positive and eager, he is very factual and realistic, which I suppose comes with the territory. He also told me about an interesting documentary that was on Channel 4 last night called "My Kidney and Me", the story of a young man who decides to donate a kidney to a stranger. I started watching it when I remembered to update the blog!

We looked at the test that I've done so far and those still to come, so I took the opportunity to ask him if there were more tests that I could do today to save me having to come in again and do them. He kindly told me I could have the ECG done, but the health test, kidney function test and C-scan can only be done once the tissue and cross-match tests are okay due to the cost involved.

The ECG went very fast as well, I reported to reception, went to the toilet, and when I came back I was called in. The nurse stuck 12 sticky pads on me; one on each ankle and wrist, and the rest on my chest. She told me that the purpose of the test was to establish a baseline for my heart rate to measure against once I'm in surgery. It took less that 5 minutes. 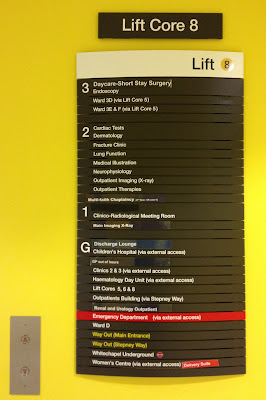 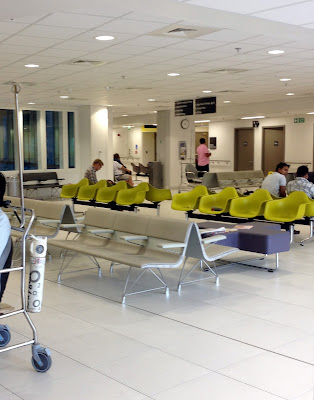 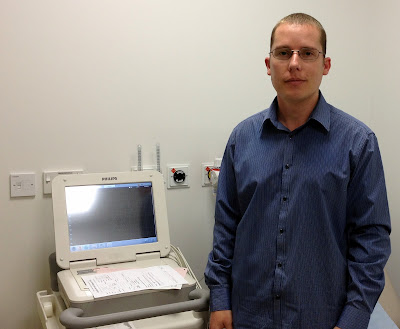 So more waiting, two weeks this time to get the results. I'm positive it will again be a perfect match so I'm already looking forward to the next tests.
Posted by John