First round of tests

After much anticipation and waiting impatiently, I finally went for my compatibility tests at the Royal London hospital today.

I went to the Renal Unit on the 9th floor and reported to reception. At first the young man was very never mind, but he noticed on my profile on his computer that I'm a living donor. His attitude changed immediately and he became friendly and polite. He summoned a nurse and gave her the necessary paperwork to have the urine sample and blood test done. The nurse gave me a urine sample cup and told me where to put it to use, and where to leave it when I'm done. Luckily I drank a lot of water on the tube on the way there as I was fasting from 9pm the night before and starting to long for my breakfast. Let's just say I'm glad I have such a good aim!

Afterwards she told me to take a number from the ticketing machine at reception and wait for my number to be called to have my blood taken.

I was number 13 and there were only 6 people waiting before me. It went really fast as there were 3 cubicles utilised for taking blood. I waited a mere 5-6 minutes before my number was up. I entered cubicle number 3 and was greeted by a very polite but formal nurse whose English wasn't too good. I wanted to ask a few questions about how many tubes were needed and how long it takes, but she shrugged them off and asked for for my documentation. On it were attached 7 bar coded labels which she started peeling off and applied them to blood tubes with different coloured caps. She asked me to roll up my sleeve, make a fist, and in went the needle. No words or reassurances, just very professional. The tubes were all filled in under a minute, she applied some dressing to my arm and with a smile I was told that was it. I was very relieved that it went so smoothly and without pain or dizziness. 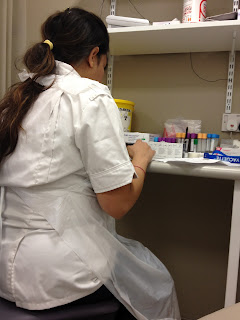 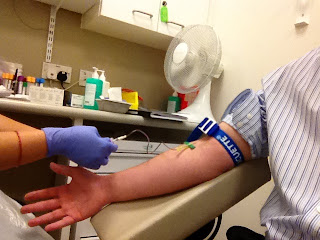 From there I decided to go outside and have something to eat just in case, as I never has so much blood taken before and I didn't know how my body would react. Luckily I had no side effects during the day, apart from a little fatigue. So I went up to the Imaging Unit on the first floor for my chest X-ray and kidney ultrasound.

As with the Renal Unit, the Imaging Unit is located in the new extension. I love the design, it's so modern and felt more like a hotel than a hospital, which made me feel more at ease. I find traditional hospitals very intimidating and depressing.

I handed the lady at reception my appointment letter and told her why I was there. She initially told me to go to the second floor for the X-rays, but after looking at my records on her computer probably noticed those magic words: "Living donor" and told me not to worry about going to the second floor, they'll just do all the scans right there. I started to feel like a mini celebrity! I was asked to take a seat and wait to be called. I barely sat down when I was called for the X-rays, being bumped right to the top of the queue! The male nurse was extremely polite, asked me to take off my shirt, remove any metal objects and stand in front of the chest X-ray machine. He returned to the safety of his booth, took the X-ray, and politely told me that was it, I can put on my shirt and return to the waiting area. I was very impressed with the efficiency of this hospital! 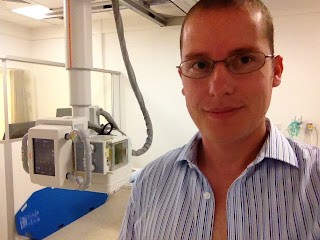 While I waited for my kidney ultrasound, I let Pieter know I was almost done. The plan was to go for a meal afterwards to catch up and celebrate the first step in the transplant process. After 10 minutes I was called by nurse Janet. She was so nice and reassuring, and told me exactly what she needed to do. She asked me to lie down with my shirt unbuttoned, and applied gel to my abdomen and sides to start the scans. I had to inhale deeply and hold my breath several times for every image taken. She was so compassionate that without realising it, inhaled and held her breath with me every time. She kindly gave me feedback after every image and told me her initial assessment was that both my kidneys were healthy.

I then had to go empty my bladder and return for further scans to determine my bladder function. Again she told me that both my bladder and prostate were healthy a functioning well, which is always good news!

She also showed me on the screen that I have a second partial spleen, which is very unusual! My immediate question was: "Can I donate that as well?". I had no idea what a spleen does, so I Googled it: "The spleen has an important role in the body's ability to manufacture antibodies that help resist infection. It also removes harmful microorganisms from the blood and gets rid of old blood cells. Before birth, the spleen manufactures red blood cells until after birth when the bone marrow can take over this process. In Chinese medicine, the spleen is considered a vital component in making chi and blood." This explains why my immune system is so good and I seldom get ill. 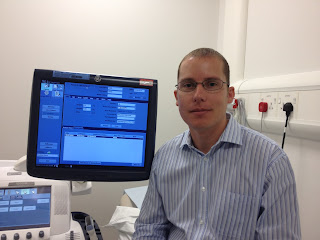 When my Ultrasound was done, nurse Janet wished me well, assuring me that I would certainly go to heaven for my good deed!

When I returned to reception, Pieter was there waiting for me. The look on his face was priceless when he saw me walk in. He looked very happy to see me, and very thankful that I was there to have the tests done. I'm sure in the back of his mind he must have wondered how committed I was, and if I would go through with it. Hopefully now all doubt will be gone.

We left the hospital, and decided to go to the Spur Restaurant at the O2 arena for a meal. Pieter insisted that I take a very large steak "to replenish my iron" as he put it. What a great guy! He has such a positive attitude, and even though he felt poorly from his dialysis from the previous day, he was still friendly and upbeat. It's so inspiring. We had a very nice meal and chatted for a long time about health, the purpose of life and everything in between.


Thanks for being such a great friend Pieter, and for guiding me through the whole process.
Posted by John