They say there is no better teacher than experience. So through my own experience of being a living kidney donor, I'll share some important tips should you consider becoming a living donor too.

Most importantly: do your research and find out as much as possible about the benefits, process, procedure and risks as you can. There is a lot of information available on the internet, where I found most of mine. You can also speak to the Renal Co-ordinator at a hospital. Below are links to a few very useful sites:

What helped me in my decision to make the donation was reading all the success stories of other donors. There are more than a hundred personal stories to be found here:


At home:
If after reading all this and you're still motivated to go through with it, I'm very proud of you. It's tough, both physically and mentally, but only for a short time. After a few months you will be back to your old health and radiate with pride and love for what you've just done. Someone at work told me last week that I look different, that it looks like there is a halo around my head. I do feel different. I feel like I have finally done something really amazing with my life, made a difference, on a human scale. It makes the strive for success and the gaining of wealth feel almost feeble. As a society we are brainwashed to join the rat race and climb the corporate ladder at any cost, and we become blind to the needy, the poor, and the sick among us.

Keep focussed on the life you are saving, there is no greater motivator. Your altruism will echo through all eternity.

Posted by John No comments:

Does this surprise you?

The NHS in England spent an estimated £1.45 billion on chronic kidney disease in 2009–10. This is equivalent to £1 in every £77 of NHS expenditure and more than the annual cost of breast, lung, colon and skin cancer combined. Please support Organ Donation and Kidney Research UK. 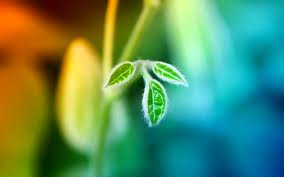 Posted by Basie No comments:

Since my last update - What a wonderful feeling to be back home being able to rest and recover from surgery. For the first three days I could barely sit still from all the excitement and new found energy but soon realised that I had to take my recovery a day at a time, especially after all of the pain medication had worn off as some days could still be a bit uncomfortable.

Furthermore I also attend clinic three times a week where my results are very closely monitored through blood and urine samples which enabled the doctors to make adjustments to my medication to ensure optimal functioning of the new kidney. I'm very grateful that Lizelle could be my side during this first month of recovery as she was always happy to drive us to the hospital which sometimes could be a bit daunting. After every visit I always look forward to update John on the successive progress of my results. Lizelle and I have such a wonderful appreciation for this new life which is so dear to us being able to spend more time with each other & friends and getting up each morning thanking God to have given us another day.

We also enjoyed a very special Christmas together with John, Natasja and Anton as always eating too much and enjoying the holiday season. What an amazing end to 2012 and so much new adventures to look forward to in 2013 and beyond. 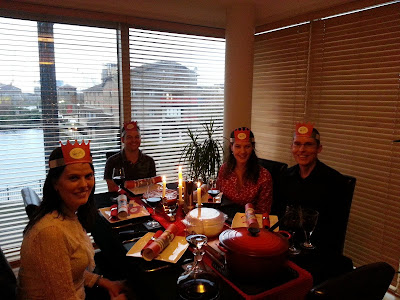 Thank you to all our family and friends, for celebrating our joy, supporting us and sharing our happiness. We sincerely thank John & Natasja for this generous gift of life and new hope.
With all our love, we thank you!

I was pleasantly surprised when I received an envelope from NHS Blood and Transplant in the post this morning. Inside was a beautiful letter of thanks for my kidney donation by Chief Executive Lynda Hamlyn, and a blue box containing a silver pendant. 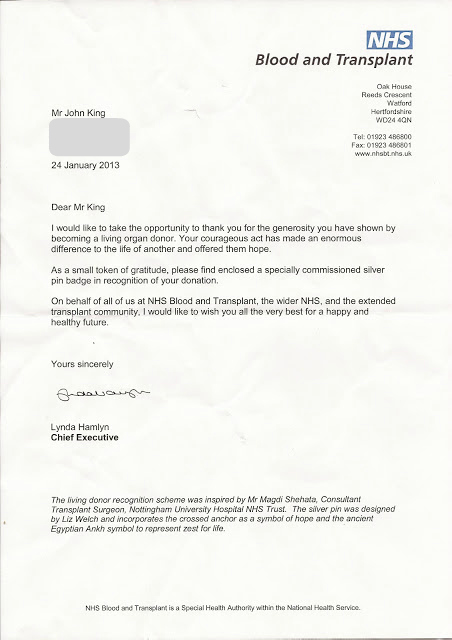 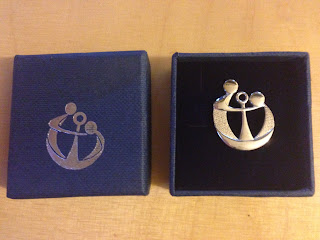 Thank you NHS for the kind gesture, I'll wear my medal of honour with pride.

My 6-week post-operation check-up was due today. However on Wednesday 02 January I bent over slightly and felt a sharp pain in my large scar in my stomach. I looked down and saw that it had opened up in the corner by about 1cm. The next morning after a shower I noticed some redness and yellow fluid in the opening. I didn't want to take any chances at this early stage so I went to the hospital to have it looked at.

I was seen by Ray Trevit, who told me it didn't look too serious and it could be that an internal stitch may have pierced the scar and caused the inflammation and tear. Just to be on the safe side Ray took a swap of the fluid for testing for an infection. Whilst I was there Ray also took my blood pressure, urine sample and some blood, which was going to be done today. I was told to keep the scar clean and keep Ray updated.

The following morning after a shower I noticed the tear looked slightly purple! I gave it a bit of a squeeze (as you do!) and something purple came to the surface! I grabbed a tweezer and pulled on it, and out came a large piece of undissolved stitch! A few weeks ago one of the keyhole scars wouldn't heal, every morning I noticed that it had opened up again. One morning I saw a tiny piece of stitching stick out, and pulled out a similar undissolved stitch, only this one was clear, so I was relieved because I knew that was what caused the tear in the large scar. Over the next few days it closed up again. 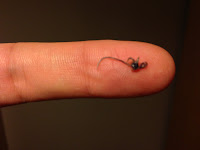 I received my test results today. Ray was very happy with the results and so was I. Every test came back normal, my kidney function is good at 62% (It was 82% before the operation with 2 kidneys), creatinine level is 117 which is normal for my size, age and single kidney, blood pressure is normal, and the swap for the infection came back negative. We discussed my health and recovery and I mentioned that I felt fine and almost as good as before the operation. I only have some discomfort from the internal stitches that still have to dissolve fully and the tissue to mend and the swelling to dissipate, and my energy levels are still a bit low. So I was told to rest for a few more days and only return to work on Monday 14 January 2013. I now only need to return for a check-up once every year. 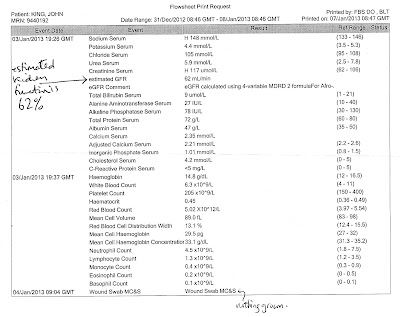 With the worst now behind me and my recovery almost complete, it feels great knowing what I did for Pieter and seeing him also recovering so well. I won't lie to you, it was a tough few weeks both physically and mentally. But it's only for a few weeks, soon it will all be a distant memory. But for Pieter it means a normal, healthy life.

Follow Pieter's progress as he gets healthier and stronger. I can't wait to see what he gets up to this year will all his new energy, health, time and determination!

Here's to wishing you all a happy, healthy and prosperous year! Thank you all for following our blog and your support. 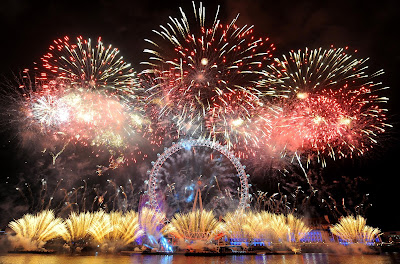 Posted by John No comments: